As EU commissioner due to visit Ramallah, PA hopes end to funding crisis

After two and a half years without European Union aid, the Palestinian Authority hopes to see hundreds of millions of euros in funding resume following a visit by European Commission President Ursula Von der Leyen to Ramallah, scheduled for Tuesday.

“I hope she will come with the following news: this matter is over and will not come back,” PA Prime Minister Mohammad Shtayyeh told state Palestinian television on Saturday evening.

PA textbooks have long been the subject of controversy. Watchdogs have criticized the programs for allegedly encouraging violence and glorifying terrorism. The AP defends them as an accurate reflection of their national narrative.

Von der Leyen is due to land in Tel Aviv on Monday for a series of meetings with Israeli and Palestinian officials. She will meet Foreign Minister Yair Lapid on Monday before traveling to Ramallah to meet Shtayyeh on Tuesday.

A diplomatic source who spoke to The Times of Israel said she could not confirm whether Von der Leyen intended to renew funding after Tuesday’s meeting, but that “there is a lot of hope “.

“There have been interventions by European leaders and diplomats to resolve the problem. It’s in everyone’s interest – including Israel,” said the source, who spoke on condition of anonymity. 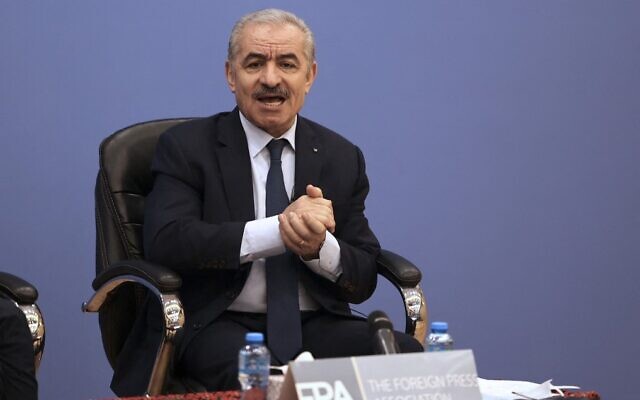 Palestinian Authority Prime Minister Mohammad Shtayyeh holds a briefing with the foreign press at his office in the West Bank city of Ramallah on November 10, 2021. (Abbas Momani/AFP)

As to whether the renewed funding would be conditional on changes to Palestinian textbooks, the source said, “That’s the big question.”

The European Union, the PA’s biggest donor, helps pay the salaries of the many PA civil servants, who make up a large part of the West Bank’s economy. Between 2008 and 2020, Brussels sent around $2.5 billion in direct budget support to the PA.

At the end of 2021, a senior European Commission official, Oliver Varhelyi – a conservative close to Hungarian strongman Viktor Orban – proposed to condition around $10 million of EU aid to the PA on reform textbooks.

European states have been debating the measure passionately ever since, with strong feelings for and against in Brussels. The delay compounded a two-year period in which funds were delayed for technical reasons.

“The larger question is: should such substantial financial assistance be tied to any element of the relationship between Europe and the Palestinians?” said a European diplomat critical of the proposal in an interview in February. 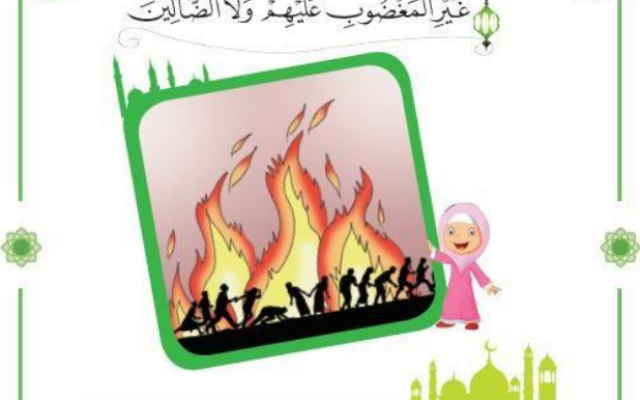 Illustration: An image of a young girl smiling as a “heretic” is burned in a Palestinian textbook. (IMPACT-SE)

“There is now too much opposition from the European Parliament, the Commission and the Council itself to transfer huge sums of money to the PA while it brazenly continues to produce anti-Semitic textbooks and violent,” IMPACT-se director Marcus Sheff said in March.

After months of bureaucratic deliberation, the decision whether to renew funding now rests with Von der Leyen, who could choose to override Varhelyi or seek to push through a compromise through the European Commission, officials said.

Senior Palestinian diplomat Ahmad al-Deek told The Times of Israel that the PA believes the funding crisis will be over within days.

“Things are expected to move towards a resolution. The matter is now in the hands of the commissioner [Von der Leyen] – and we hope it will bring us good news,” al-Deek said.

Any degree of conditionality would be unacceptable to Ramallah, a Palestinian Authority official said in a phone call.

“Our hope is that funding will resume unconditionally,” said the official, who spoke on condition of anonymity.

Ramallah has been plagued by repeated financial difficulties and dwindling international support, making the loss of EU funding a major blow. Palestinian and Israeli officials have warned that the PA could face a fiscal collapse, in part due to lack of aid.

Many PA officials have had to make do with partial or deferred salaries for months. The PA has fallen further and further behind in payments to Israel for electricity and water. And the PA struggles to pay medical bills for Palestinians who seek treatment in Israeli hospitals.

In an attempt to ease the growing budget crisis, Israel lent more than 600 million shekels ($176 million) to Ramallah last year. But during the same period, Israel deducted a similar amount to penalize the PA for paying stipends to the families of Palestinians killed or imprisoned by Israeli authorities, including convicted terrorists – a PA policy that, according to Israel, incites violence. 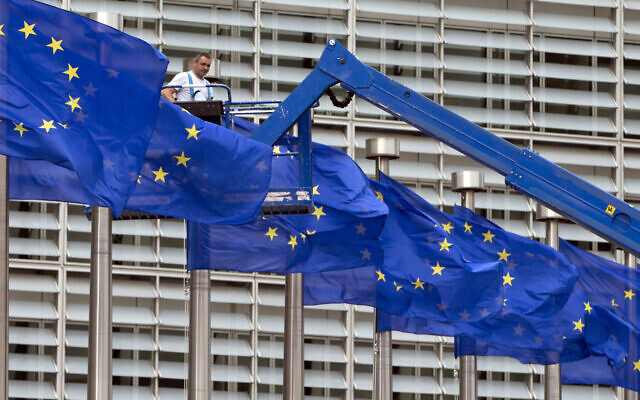 In this file photo from June 23, 2016, a worker on a lift adjusts EU flags outside EU headquarters in Brussels. (AP Photo/Virginia Mayo, File)

Palestinian Authority officials have repeatedly said they would not agree to condition aid on changes to Palestinian schoolbooks. The AP has repeatedly denied the accusation that its textbooks encourage violence and terrorism.

“We are made to explain and justify what appears in our teaching materials, even if it explains our narrative and our national identity. Meanwhile, no one is asking to review Israeli programs and media, so that the world can see the true incitement of Israeli institutions,” PA President Mahmoud Abbas said in a speech to the United Nations last year. .

For just $6 a month, you can help support our quality journalism while benefiting from The Times of Israel WITHOUT ADVERTISINGas well as access Exclusive Content only available to members of the Times of Israel community.