When Jules Verne wrote “Journey to the Center of the Earth” more than 150 years ago, he imagined a land of glowing crystals, turbulent seas, prehistoric animals and giant mushrooms.

But what really lies beneath our feet remains a mystery – even today we know more about Saturn’s rings than our planet’s interior.

Over the past 30 years, however, our understanding of the Earth’s inner core has expanded dramatically, and it has been shown to shift and change over decades.

But whereas it was previously thought to spin at an ever faster rate than the planet’s surface, a new study shows that it oscillates, spinning back and forth a mile every six years.

The cycle could explain variations in the length of days, which have oscillated persistently for several decades. 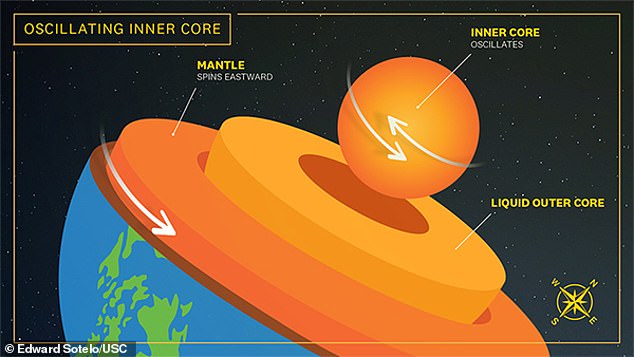 USC researchers have identified a six-year cycle of super-rotation and sub-rotation in Earth’s inner core, contradicting previously accepted models that suggested it consistently rotates at a faster rate than the surface of the planet

Crust: Down to a depth of 70 km, this is the outermost layer of the Earth, covering both oceans and land.

Coat: Descending to 2,890 km with the lower mantle, it is the thickest layer on the planet and consists of silicate rocks richer in iron and magnesium than the aerial crust.

Outer core: Extending from a depth of 2,890 to 5,150 km, this region consists of liquid iron and nickel with traces of lighter elements.

inner core: Descending to a depth of 6,370 km at the very center of planet Earth, this region was thought to be made of solid iron and nickel. But this new study suggests that it contains both pasty and hard iron.

Earth’s inner core is a solid, hot iron ball the size of Pluto — and as hot as our sun.

It is impossible to observe directly, which means researchers must rely on indirect measurements to explain the pattern, speed, and cause of its movement and changes.

The US team used seismic data from 1969 to 1974 to create a computer model of core motion.

The simulations confirmed the shifts of the Earth’s surface relative to its inner core, as scientists have claimed for 20 years.

However, this contradicted previous theories suggesting that the rate of rotation was consistently faster than the surface of the planet.

“The inner core is not fixed – it moves under our feet and seems to go back and forth a few kilometers (1.25 miles) every six years,” said lead author Professor John Vidale of the University of Southern California.

Research published in 1996 was the first to propose that the inner core rotates faster than the rest of the planet – also known as super-rotation – at around 1 degree per year.

Professor Vidale’s later findings reinforced the idea that the inner core super-rotates, albeit at a slower rate.

Using data from the Large Aperture Seismic Array (LASA), a US Air Force facility in Montana, Professor Vidale found that the inner core rotates about 0.1 degrees per year.

Laboratory staff have developed a new beamforming technique to analyze the waves generated by Soviet underground nuclear bomb tests from 1971 to 1974 in the Arctic archipelago Novaya Zemlya.

The latest results emerged when they applied the same methodology to a pair of earlier atomic tests beneath Amchitka Island at the tip of the Alaskan archipelago – Milrow in 1969 and Cannikin in 1971.

Measuring the compression waves resulting from nuclear explosions, they discovered that the inner core had an inverted direction, rotating underrotated by at least a tenth of a degree per year.

‘Our latest observations show that the inner core rotated slightly slower from 1969 to 1971 and then moved in the other direction from 1971 to 1974,’ Prof Vidale said.

“We also note that day length has increased and decreased as might be expected.

“The coincidence of these two observations makes oscillation the likely interpretation.”

Because Earth’s inner core is so inaccessible, researchers have had to rely on the only means available to probe the deepest Earth – seismic data (stock image)

Map A shows the location of LASA (triangle) and the two nuclear test pairs (stars). B and C show the distribution of predicted time lags

This is the first time the six-year oscillation has been indicated by direct seismological observation.

Using seismological data from atomic tests in previous studies, researchers were able to determine the exact location and time of the seismic event.

“The idea that the inner core oscillates was a model that existed, but the community was divided on its viability,” Prof Vidale said.

“We set out hoping to see the same direction and rate of spin in the previous atomic test pair, but instead we saw the opposite.

“We were quite surprised to find that it was moving the other way.”

LASA closed in 1978 and the era of underground atomic testing in the United States is now over, meaning that researchers will have to rely on relatively inaccurate seismic data for future research in this area, even with recent advances in instrumentation.

However, the study supports speculation that the inner core oscillates with variations in day length – plus or minus 0.2 seconds over six years – and geomagnetic fields, both of which match the theory in amplitude and phase.

Vidale said the findings provide compelling theory for many questions posed by the research community.

“One of the questions we’ve tried to answer is: Is the inner core moving gradually or is it mostly locked to everything else in the long run?

“We are trying to understand how the inner core formed and how it moves through time – this is an important step in understanding this process better.”

The study is published in Science Advances.

It is believed that the magnetic field of our planet is generated deep in the earth’s core.

No one has ever traveled to the center of the Earth, but by studying shock waves from earthquakes, physicists have been able to determine its likely structure.

At the Earth’s core is what was thought to be its solid inner core, two-thirds the size of the moon, and composed mostly of iron. However, this new study disputes that.

At 5,700°C, this iron is as hot as the surface of the Sun, but the crushing pressure caused by gravity prevents it from liquefying.

Surrounding this is the outer core, which is a layer of iron, nickel and small amounts of other metals 1,242 miles (2,000 km) thick.

The metal here is fluid, due to the lower pressure than the inner core.

Differences in temperature, pressure, and composition in the outer core cause convection currents in the molten metal as cold, dense matter sinks and hot matter rises.

The charged metals passing through these fields themselves create electric currents, and so the cycle continues.

This self-sustaining loop is known as a geodynamo.

The spiral caused by the Coriolis force means that the separate magnetic fields are roughly aligned in the same direction, their combined effect adding up to produce a vast magnetic field engulfing the planet.