Life on the Brink: Brighton’s Thrilling New Aerial Walk on i360 | Travel

LStep away now if you’re afraid of heights, because what follows could be read as a surefire recipe for panicking. First, take in an observation tower, 162m (532ft) high and overlooking the Sussex coastline. So grab a light woman from . . . let’s just say mature years, place it in the tower’s ascending circular spectator pod and send it as far as it goes. Then remove said woman and attach her to the roof of the pod. Sprinkle with bad weather and simmer.

Maybe you can guess who this woman is and, in fact, what I’m about to do. Yes, as foolhardy as it sounds, I chose to be the first visitor to scratch the top of the Brits’ glass-paneled donut-shaped viewing pod. Airways i360 in Brighton. Did I lose my marbles? Very probably.

When I first heard about this new attraction, it appealed to my inner adrenaline junkie – despite the oddly tame name: Walk 360. The easy part comes first – that gentle “flight” to the sky for many oohs and aahs at the pretty sights. Then, at 138 m, one of the glass panels facing the tower on the side opened and, after climbing a ladder, I found myself – perhaps trembling with fear – on the roof of the nacelle , ready to begin a ride as windy as a safety rope and cords attached to an inside rail would allow. I was also rather enamored with the idea of ​​zero travel hassles: I live just down the road – so much the better to wait out the rain which causes my 9am time slot to be cancelled.

It is now 4:30 p.m., and here I am with a helmet and a harness tight enough to give me a playground, introduced inside the nacelle with the i360 technical team; the big boss, Anthony, is a reassuring presence.

A hatch opens. “Jump over this chute,” comes Anthony’s instruction. “Climb the ladder and duck before you leave.”

Easier than it looks. Looking down, I stare into a dizzying void. With my eyes level, all I can see is a fire engine red metal ladder attached to the 4m diameter tower. And then, with an unsightly leap, I get out, and Anthony attaches me to a series of mobile lanyards on a rail attached to the inner curve of the nacelle. 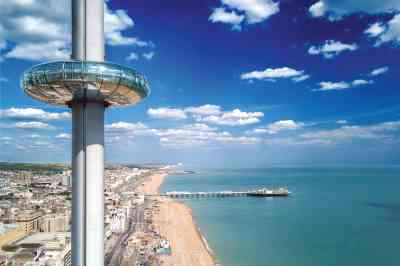 Am I afraid? Surprisingly, no. The lanyard attached to my harness extends less than a meter from the inside rail, so I won’t risk acting like a badly trained dog and rushing over the edge. In fact, there are a few meters between me and infinity, so I begin a slow circular walk and soak up the view.

Short of flying over the city, there’s no better way to see Brighton and the Sussex coast than this. Once launched, Walk 360 will allow a maximum of 30 people to enjoy the ascent and then 20 minutes on the roof.

While I’m up there, the sun is timidly rising. A silver ribbon outlines the fuzzy silhouette of the Isle of Wight. I can also see Worthing Pier and Shoreham Harbour. Beneath me are the 19th century residences of Hove in all their coagulated cream-toned glory. And, as a sudden breeze whips my face, I can barely make out my house, nestled a few blocks behind Regency Square.

My husband had offered to stand on the roof of our house and wave at us, then changed his mind because of the weather. Wimp! But too bad; this starling’s view of the city unrolls the dark green undulations of the South Downs, then rushes to more prosaic images: the local Primark, the city buses, the great iron canopy of Brighton station.

● Brighton’s finest boutique hotels
● Fun things to do in Brighton

Accompanied by the metallic clank of the cords, I continue to walk. I must look like a last-day chained convict, but as I sneak east I find glistening views of the Grand Hotel, Brighton Palace Pier and then, beyond, the climbs and descents to the summit chalky green that make up the cliffs of the Seven Sisters.

On the south side there is the burnt-out West Pier, its skeleton remains a poignant reminder of the town’s great past as an Edwardian tourist magnet. The waves form lacy scallops against the shingle; tiny dogs drag their owners along Hove Lawns – it’s like a form of full-scale pole dancing, although much more fun.

The 360 ​​walk isn’t the only activity you can try at the tower, but it sure beats those morning yoga sessions, flight and dinner packages, and gin tastings. Since 2019, visitors have been able to climb its internal ladders for an educational lecture on its construction, before quickly ascending to the outer platform for limited sea and city views. The Drop 2021 charity fundraiser reminders have been revamped to Drop 360 and are now available to everyone.

That said, can a £40 ride in the sky or a £99 encore really help offset i360’s mounting losses – no doubt exacerbated by the news that its sponsorship deal with British Airways will end this autumn?

The attraction has sparked controversy since it opened in 2016, when the £46million cost of creating what was billed as the world’s first vertical cable car fueled negative local opinion, not least because 36 £.2m was on loan from City of Brighton & Hove. advice. And then there was its dodgy appearance – naysayers dubbed the tower the iSore, while others compared it to a giant crematorium chimney.

Well, whisper it – I love the i360. On a sunny day, I love the way the sea, sky and pebbles reflect off the belly of the pod. On long walks, the tower (the tallest structure in East Sussex) acts as a beacon – for me, reassurance that I am almost home.

I also enjoy those moments during Pride or New Year’s Eve when the capsule conveys a neon burst of brilliant colors – it gives meaning to the ‘vertical pier’ concept envisioned by its designer, Marks Barfield Architects, who also created the London Eye.

Although not necessarily a money-maker, this attraction does add some merit to Brighton – a truly, literally, uplifting attraction.

Three other dizzying experiences in the UK 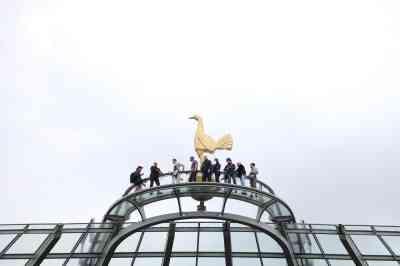 Perfect for football fans, this climb above London’s biggest club stadium lasts 90 minutes and is named after Tottenham Hotspur’s motto, ‘To dare is to do’. Starting with a springboard along a walkway nearly 50m above the pitch, you’ll enjoy views of London and the 62,000-capacity stadium, then try a controlled descent from a platform 42m high to the south podium (adult from £35, child from £28, minimum age 8; experience.tottenhamhotspur.com). 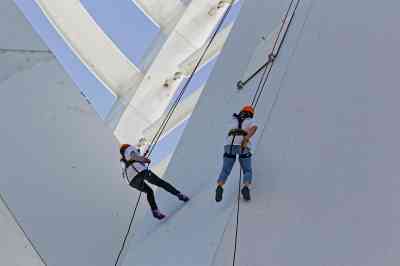 Enjoy a thrilling adrenaline rush as you abseil 100m down the side of Portsmouth’s elegant Spinnaker Tower, facing the sea. For those of a calm disposition, there are fantastic views over Portsmouth Harbor Portsmouth, the Solent and to the Isle of Wight (£100, minimum age 14; spinnakertower.co.uk). 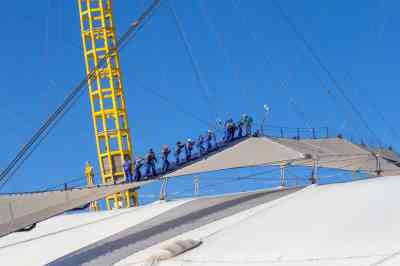 Climb the roof of the O2

A climb to the roof of the O2 is at its best when it coincides with dusk or sunset. Once you’ve donned a climbing jacket, boots and harness, you’ll follow your guide and enjoy iconic sights such as the Maritime Museum and Naval College in Greenwich, Olympic Park and Canary Wharf (£32, age minimum 8; theo2.co.uk).